It is a privilege for me to be among this distinguished audience.

I feel honored to have been invited by the India Foundation to share my views on Nepal-India relations from the perspective of democracy and development.

The progress that India has made in various sectors is an exemplary story of our times. Your achievements in the fields of science, technology, and social innovation has been a particular inspiration.

India has also proved that it is democracy that binds diverse societies together while promoting tolerance and individual dignity.

Democracy has been India’s gift to developing world.

We recall with pride the active participation of great Nepali leaders like B.P. Koirala in India’s freedom movement. They responded to the call of Gandhiji, boycotted government schools and joined the Quit India Movement in 1942.

B.P. Koirala taught us, and I quote, “democracy is indivisible, if you want democracy at home, you cannot afford to neglect all struggles for it.” End of quote.

He believed that when the British rule ends in India, it would be Nepal’s turn for democracy. He was prophetic.

In seven decades of struggle, democracy has seen ups and downs in Nepal.  We are grateful to the people and the Government of India for their goodwill and moral support for all democratic movements in Nepal since the 1950s.

After the historic people’s movement in 2006, Nepal today is in midst of a profound transformation. The constitution we promulgated in 2015 was written in the most democratic and inclusive manner.

It accommodates aspirations of diverse ethnic groups. It guarantees every woman right to lineage and right to property without discrimination. A full and fair gender balance is ensured in all high offices of state.

Still, we consider our constitution to be a living and dynamic document that is open to revisions as and when required.

Just three days ago, we voted on an important amendment to address the concerns raised by people from Tarai-Madhesh.  Though the amendment did not muster the two-thirds majority of votes required, the process brought to the forefront the wider acceptance and importance of the issues raised.

It is our commitment to redress grievances of our citizens.

As all of us know, democracy is a process.For  democracy to mature,it is necessary to overcome the legacy of the past.

We will take everybody along on the journey towards greater prosperity, inclusion and dignity.

Democracies must deliver to stay relevant in a world that is deeply inter-connected.  Today’s citizens demand better governance to advance their rising aspirations.

Our foreign policy is dictated by the interest of the Nepali people and the principles of Panchasheel. The five principles of peaceful co-existence that are derived from the teachings of Siddhartha Gautam — the enlightened son of Nepal.

We judge every issue on its merits without fear or favour in consistent with our national interests, the principles and purposes of the United Nations, and principles of non-alignment.

Nepal’s foreign policy priority begins with its neighboring countries, and extending it to wider international community.

We consider trust as a pre-requisite to an enduring relationship.

Nepal  has clearly, and consistently made it clear  that under no circumstances Nepal would allow its soil to  be used against its neighbours or any other countries. We also expect them to be sensitive to Nepal’s concerns and sensitivities.

We believe that a strong, stable, peaceful, democratic, and prosperous Nepal is in our interests, in the interest of our neighbours, and the entire global community.

Nepal-India relations are unique and unparalleled in character. People of the two countries share special bonds and affinity.

From Janakpur to Ayodhya, Lumbini to Bodhgaya, or Pashupatinath to Vishwanath, we share a common set of values, culture and civilization.

The advent of democracy has further honed people-to-people contacts and deepened mutual trust across a wide spectrum.

Beyond solidarity, India is also one of our most important partners in development. It has been a reliable friend and neighbor in need and hardship.

We are grateful for India’s generous support towards socio-economic change, and humanitarian assistance in Nepal going back decades.

We also share several regional and global platforms. It is our firm conviction that international cooperation is not a choice but a compulsion. Nepal aspires to grow together with SAARC and BIMSTEC countries.

Terrorism remains the biggest threat to peace, stability, development and democracy.Nepal condemns terrorism in all its forms and manifestations. We call for concerted efforts to combat this menace.

In addition to natural hazards like the earthquakes of 2015, Nepal is also bearing the brunt of climate change despite negligible contribution to greenhouse gas emissions.

No country, however big and powerful, can deal with these transnational challenges alone. This demands stronger partnership and deeper collaboration among us all.

It is my firm belief that economic prosperity and political freedoms must go hand in hand in the 21st century.

I consider that a few development challenges must be confronted together.

The first is about our young demography, and the challenge of finding decent, well-paying jobs on a mass scale at a time when the world is witnessing the fourth Industrial Revolution.

The second is about harnessing renewable resources, such as hydro-power, and mitigating climate change. How do we manage our common natural resources?

The third is probably the biggest generational challenge of our times. It is about ending absolute poverty by 2030, narrowing inequality within and across countries, and reducing vulnerabilities?

The fourth issue is to grapple with both the challenges and opportunities that come with intense urbanization. How do we build sustainable cities and prosperous villages?

And the fifth development challenge of our times will be to adapt to new patterns of production, trade and employment that are being disrupted by technological breakthroughs. How do we manage dislocation of established patterns of livelihoods?

I have only flagged these issues, and do not wish to elaborate today.

But my emphasis is on the fact that the more policy challenges become complex, the greater the salience of democracy to garner consensus and mediate likely conflicts.

The world watches Asia with great interest today. While this region is the world’s brightest spot in the 21st century, there are also major challenges staring at us. We need to work together to make the most of existing opportunities.

A shared vision of prosperity based on the foundation of peace, stability and democracy, we hope, will uplift us all.

And we believe that Nepal and India — as one of the closest neighbors in the world — have a vital bearing on this march towards greater freedoms and progress.

Thank you and Namaste. 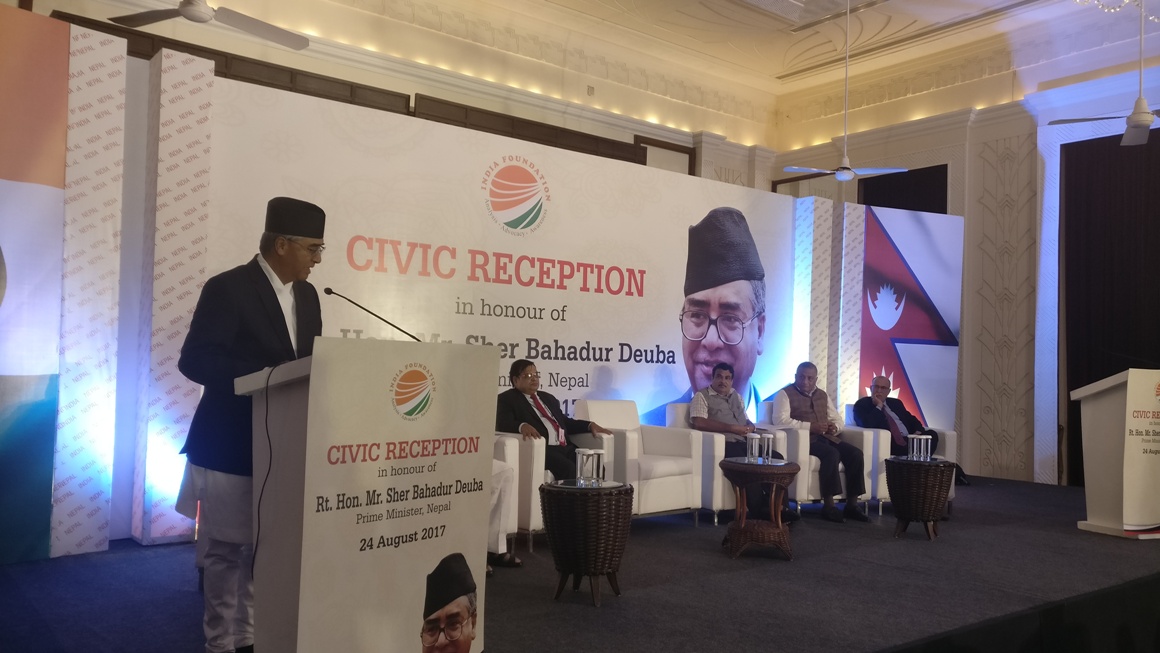