The Embassy of Nepal in London organized a special ceremony today (20 September 2019) in London to celebrate the National Day and the fourth anniversary of the promulgation of the Constitution of Nepal.

Addressing the special ceremony as the Chief Guest, Member of the House of Commons and Chairman of the All Party Parliamentary Group for Nepal, Hon. Virendra Sharma stated that the relationship between Nepal and the United Kingdom remained vital and vibrant, however, it was not a new one, these two great nations had shared more than two centuries of history. Hon. Sharma further stated that the official visit of Prime Minister Rt. Hon. K.P. Sharma Oli had initiated many useful and important conversations to take Nepal-UK relations to a new height. Stating that next year, Visit Nepal 2020 is an amazing opportunity to welcome many more visitors to Nepal from the UK, Hon. Sharma added that the Visit Nepal Year would be successful and open many eyes to the wonders of Nepal and to the opportunities there.

Speaking as the Guest of Honour of the ceremony, Director for South Asia of the Foreign and Commonwealth Office of the UK, Mr. Gareth Bayley stated that during the past one decade and so, the Nepali people had achieved some historic political developments, adding that they had promulgated a rights-based, democratic and inclusive constitution, which ended the political transition and paved the way for the economic and social development of the country. Extending sincere greetings on the auspicious occasion of the National Day of Nepal and the best wishes for the peace, progress and prosperity of Nepal and the Nepali people, Director Mr. Bayley appreciated Ambassador Dr. Subedi for his sincere efforts for promoting tourism of Nepal in the United Kingdom and encouraging British trade and investment in Nepal as well as for strengthening academic, educational and cultural relations and for enhancing people to people ties between these two friendly countries.

Welcoming the guests to the special ceremony, Ambassador of Nepal to the United Kingdom, H.E. Dr. Durga Bahadur Subedi stated that the friendly and mutually rewarding bilateral relationship between Nepal and the United Kingdom had grown considerably over the span of two centuries, adding that ever since the establishment of diplomatic relations, both the countries had maintained excellent state of friendship with enhanced development cooperation and growing people to people ties.

Calling Nepal as a land of unparalleled natural beauty and cultural diversity and home to magnificent and majestic mountains as well as the motherland of the bravest of the brave Gurkhas and the legendary mountaineers Sherpas, H.E. Dr. Subedi requested the Nepali and British people to support and publicize the visit Nepal 2020 campaign and to highlight Nepal as a safe, secure, peaceful, beautiful and best value tourist destination.

The special ceremony was attended by more than five hundred guests including thirty-five honourable members of British Parliament, including the members of the All-Party Parliamentary Group for Nepal and the London-based Ambassadors and High Commissioners as well as representatives of diplomatic corps and UN agencies in London. Present on the occasion were high dignitaries of the British Governments, Mayors, Deputy Mayors and Councillors, office bearers of Britain-Nepal Society, Britain-Nepal Chamber of Commerce and various Nepal related British NGOs and civil society organizations as well as the representatives of Nepali community.

A Nepali cultural programme was presented on the occasion with the participation of the Brigade of Gurkhas of the British Army and local Nepali artists. The ceremony was followed by a luncheon with typical Nepali cuisine. 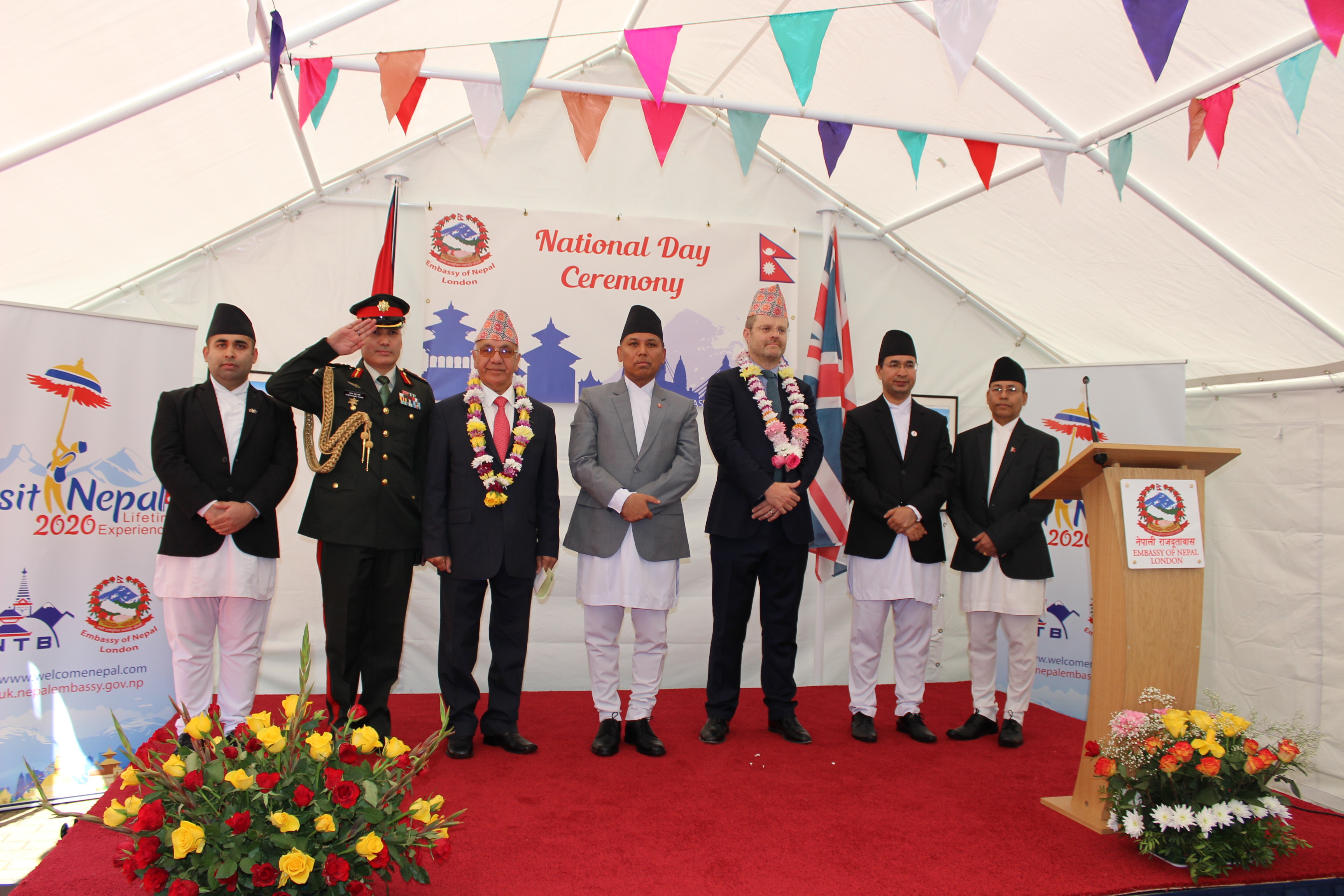