The Rt. Hon’ble Pushpa Kamal Dahal ‘Prachanda’, Prime Minister, had a meeting with His Excellency Xi Jinping, the President of the People’s Republic of China, in Goa, India today on the sidelines of BRICS-BIMSTEC Outreach Summit. During the meeting, the two leaders expressed satisfaction over the close and cordial bilateral relations based on the five principles of peaceful co-existence. The two leaders had substantive discussion on promoting cooperation for development in wide ranging areas that included infrastructure, connectivity, trade, transit, culture, tourism and people to people relations. The Rt. Hon’ble Prime Minister reiterated the invitation to the President of China to visit Nepal. The President of China expressed readiness to visit Nepal at the earliest convenient date.

Earlier this afternoon, The Rt. Hon’ble Prime Minister met His Excellency Tshering Togbay, Prime Minister of Bhutan. During the meeting, the two Prime Ministers deliberated on the measures to enhance bilateral relations between the two Himalayan nations having commonalities of culture and nature and facing development challenges of the same kind. They also talked about the early resolution of the issue of Bhutanese refugees in Nepal.

The Rt. Hon’ble Prime Minister arrived at Goa this afternoon in order to participate in the BRICS-BIMSTEC Outreach Summit convened by the Prime Minister of India tomorrow. He was received at Goa International Airport by His Excellency M.J. Akbar, Minister of State of External Affairs of of India, His Excellency Ranjit Rae, Ambassador of India to Nepal and officials of the Embassy of Nepal in India. 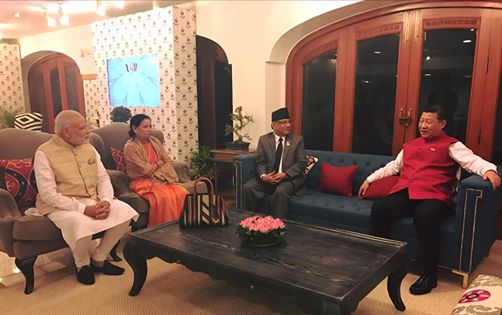