While recalling Nepal’s role as chair of the global coordination bureau of LDCs to steer negotiations for the IPOA in 2011, the Deputy Prime Minister highlighted the need for effective, full and timely implementation of the IPOA in coherence and synergies with the 2030 Agenda for Sustainable Development and other landmark achievements made last year. He added that the national e fforts need to be complemented by adequate international support measures in all pillars including ODA, investments, trade and technology transfer.

The Deputy Prime Minister laid emphasis on overcoming the shortcomings that led to the situation where only four LDCs could graduate since 1971, when the group was first created. Referring to the abject and widespread poverty in the LDCs, Hon. Thapa said that every day “looks like a day in the disaster for many people in those countries” and “poverty and exclusion foster the breeding ground for conflicts”.

The Hon. Deputy Prime Minister informed that Nepal entered into a new era of hope and confidence for national development with the promulgation of a rights-based, progressive and inclusive constitution in September 2015. He concluded by calling the MTR Outcome Document a comprehensive and forward-looking, and shared his confidence that the momentum generated five years ago in Istanbul would be maintained and that the IPOA would be implemented with commensurate resources, technology and partnerships.

Those speaking in the Opening Ceremony were HE Mr. Mevlüt Çavuşoğlu, Minister for Foreign Affairs of the Republic of Turkey, who also presided the Ceremony; Mr. Mogens Lykketoft, President of the General Assembly; Ms. Helen Clark, UNDP Administrator among others. During the Ceremony, Nepal was unanimously elected as one of the Vice-Chairs of the MTR. Nepal was also elected as Rapporteur of the MTR unanimously.

During the informal ministerial consultation which took place before the Opening Ceremony, the Deputy Prime Minister had a brief meeting with HE Mr. Mevlüt Çavuşoğlu, Minister for Foreign Affairs of the Republic of Turkey.

The Hon. Deputy Prime Minister and Minister for Foreign Affairs left Antalya for Kathmandu this afternoon.

The MTR Outcome Document will be a political declaration to be adopted in course of the conference. The Document was inter-governmentally negotiated in New York.

Permanent Mission of Nepal to the United Nations 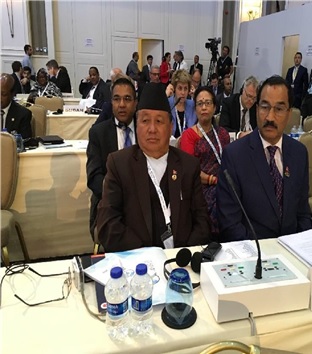