Ambassador Upadhyay participates in an interaction on Nepal-India relations

His Excellency Mr. Deep Kumar Upadhyay, Ambassador of Nepal to India, participated in an interaction programme organized by Vivekanada International Foundation in New Delhi on the topic of ‘Nepal-India Relations: The Way Forward‘.

In his statement, Ambassador Upadhyay said that given the closeness of geography and socio-cultural linkages, Nepal-India relation stands on its own merit and should not be compared with any other relation. He stressed that efforts should continuously be made from both sides to further consolidate this relation including by enhancing economic cooperation, trade and investment.

The Ambassador stressed on the need of effective implementation of the current bilateral projects that can have visible positive impact in the lives of the people. In the area of hydropower development, he pointed out that the early realization of ongoing joint undertaking like Pancheshwar would help generate a greater momentum for working together.

The Ambassador expressed concern over the huge trade deficit Nepal is facing with India and emphasized that more of facilitative measures are required for encouraging exports from Nepal to India, which will include proper address of tariff and non-tariff issues.

Terming Nepal’s historic peace process a model of peaceful political transformation, the Ambassador spoke about the forthcoming local election in Nepal as an important step for strengthening democracy and democratic institutions at the grassroots level.

General N C Vij, Director of the Foundation, chaired the programme, which was attended by former diplomats, security experts and others.

The Foundation is a New Delhi-based think tank. 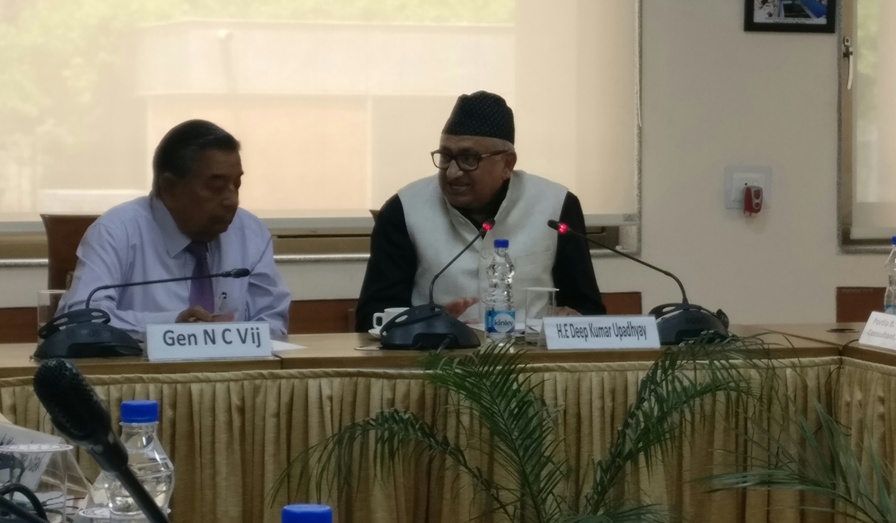