Speaking on the occasion, Right Honourable Mr. Seán Ó Fearghaíl TD, Ceann Comhairle (Speaker of the Irish Parliament) stated that growing links between Ireland and Nepal have been formally recognized at parliamentary level with the establishment of  Friendship Group in the Irish Parliament. He further added that the Friendship Group would serve as a valuable platform to develop links between Ireland and Nepal. The Rt. Hon. Speaker said that the Irish people who had visited Nepal have been praising Nepal’s unique nature and diverse culture. He expressed his desire to visit Nepal in the near future. He also stressed the need for exchange of visits so that experiences can be shared between the two countries.

Addressing the ceremony, Mr. Sharad Raj Aran, Deputy Chief of Mission at the Embassy of Nepal in London mentioned that the Constitution of Nepal has incorporated universally accepted democratic norms and values such as multiparty democracy, pluralism, adult franchise, rule of law, representative and accountable government, social and economic justice, independent judiciary, freedom of press and human rights. Mr. Aran added that the Government of Nepal was fully committed to institutionalize democracy by holding local, provincial and parliamentary-level elections within the period of eight months.  He also expressed his confidence that the formation of the Group would be instrumental in further enhancing Nepal-Ireland relations in general and in consolidating Nepal-Ireland parliamentary ties.

President of Nepal-Ireland Society, Mr. Deepesh Man Shakya said that Nepalese community in Ireland was excited and encouraged with the formation of Ireland-Nepal Parliamentary Friendship Group. He informed that the formal inauguration of the Friendship Group was finally materialized after untiring efforts by the Embassy of Nepal in London, Nepal-Ireland Society and the Irish friends of Nepal. He expressed his hope to work closely to promote tourism, trade and investment between Nepal and Ireland. 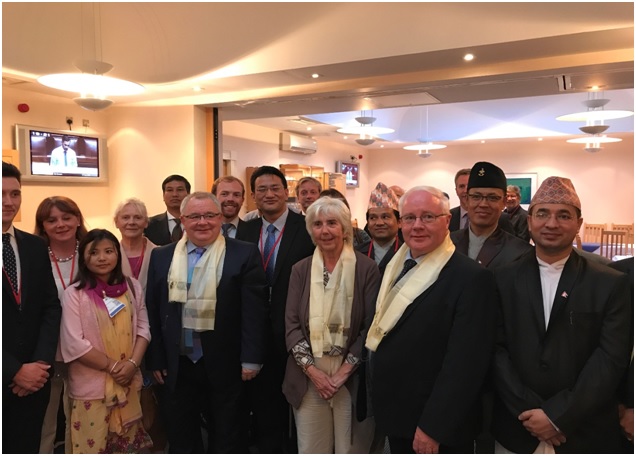