A Program on
“POSSIBILITIES OF PROMOTION OF NEPALI PRODUCTS IN THE UNITED ARAB EMIRATES”
Sharjah, 17 February 2017

The Embassy of Nepal, Abu Dhabi organized a program on “Possibilities of Promotion of Nepali Products in the United Arab Emirates” in Sharjah on 17 February 2017. This program was the first of its kind being held in the UAE by the Embassy where around One hundred participants from Embassies and Consulates General of SAARC Countries, Nepali Business Council-Dubai, Nepali Business Community, Representatives of Super/Hyper Markets, Academia, Professionals and Media were present.

Opening the program, Mr. Netra Bahadur Tandan, Charge D’ Affaires a.i. highlighted the availability of abundance of natural and human resources in the country to produce products and promote trade and commerce; and bringing in foreign investment to increase the domestic products as well. He stated that the Embassy, in line with the priority policy of the Government has been working to identify the products and diversify the trade relation for which the business persons have to play a key role. He also urged all the stakeholders to contribute and participate in the socio-economic development of Nepal.

Presenting his paper on possibilities of the promotion of the Nepali products in the UAE, Mr. Krishna Aryal, Second Secretary at the embassy made a cursory glance on the current trade relations with the major trade partners, India and China, and SAARC countries in general and with the UAE in particular. He outlined the comparative trade relation with UAE in terms of exportable and importable products and its value. Besides the potential agro-based and crafts and manufacturing exportable items identified by Nepal Trade Integration Strategy (NTIS) 2016, he presented other possible exportable items, with SWOT analysis, like honey, coffee, lentils/pulses, instant noodles, gold/silver jewelry, Nepali Dhaka Cloths, Medicinal herbs and oil, natural and fresh Water etc., particularly in the UAE. The paper focused on the importance of boosting the export from Nepal at the earliest to reduce the alarming trade deficit and correct the export and import ratio between the two countries.

Expressing their remarks on the paper, Dr. Aasif Ali Siddiqui, President of the Nepali Business Council-Dubai, Mr. Ramesh Poudel, Country Manager, Nepal Airlines, UAE, Mr. Hasitha De Alvis, Minister/Tea Promotion, Consulate General of Sri Lanka, Dubai, Asst. Prof. Dr, Utsav KC, Higher College of Technology, UAE University, Dr. Vijay Kumar Yadav, Senior Manager, Westzone Hypermarket, Mr. Saneesh Sehgal, Senior Manager, Armstrong Motors, UAE, representative from LULU Hypermarket and other entrepreneurs expressed the need of branding the products, conducive environment for production and continuation of such program to boost the morale of the business person to promote the trade between the two countries. The participants appreciated the initiatives taken by the Embassy and vowed to contribute in the bilateral trade relation with importing more Nepali products in the UAE. The program was run by Mrs. Sangita Neupane, Third Secretary and concluded with the Vote of Thanks by Mrs. Bishnu Kumari Adhikari, Second Secretary of the Embassy. 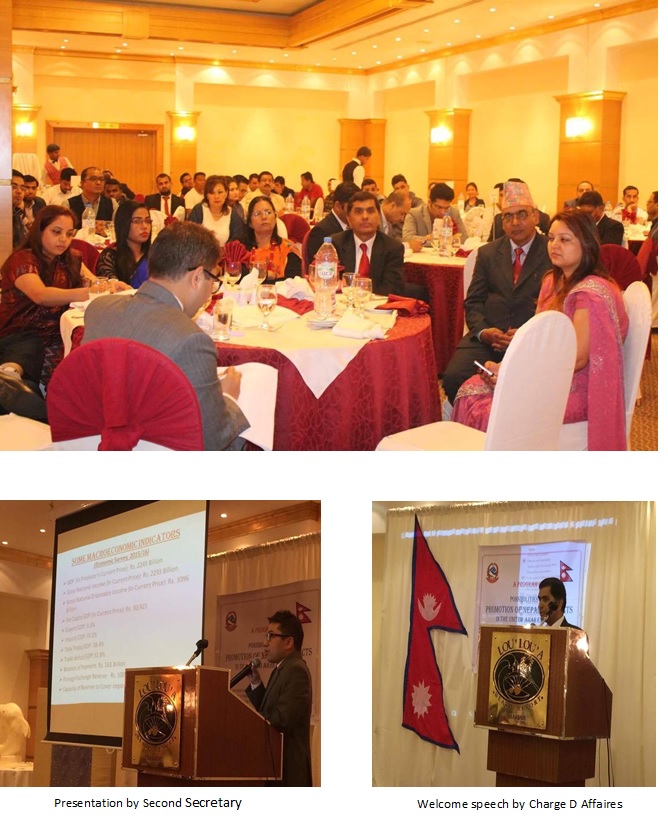