Earlier today, Minister Gyawali attended the opening session of the conference which was addressed by H.E. Mr. Ilham Aliyev, President of the Republic of Azerbaijan. In the first plenary that followed, Nepal was elected, by acclamation, as a Vice-Chair of the Ministerial Conference representing the Asia-Pacific region. After the presentation of the report of the Senior Officials Meeting held on 3-4 April 2018, the plenary held the interactive debate on “Promoting international peace and security for sustainable development”.

Participating at the debate, Minister Gyawali, highlighted the continued relevance of the NAM’s principles and underscored the significance of solidarity among NAM countries. He also emphasized the importance of sharing of each other’s best practices and resources to deal with conflicts and achieve sustainable development. He also expressed Nepal’s readiness to share its experience of uniquely successful peace process.

As Vice-Chair, Minister Gyawali also presided over a part of the afternoon session of the interactive dialogue today itself.

In the course of the day, he also held several bilateral meetings. Hon’ble Minister Gyawali paid a courtesy call on President of the Republic of Azerbaijan, H.E. Mr. Ilham Aliyev. Minister Gyawali conveyed greetings from the Rt. Honourable President madam Bidya Devi Bhandari and the Rt. Honourable Prime Minister Mr. K.P. Sharma Oli to His Excellency President of the Republic of Azerbaijan. During the meeting, prospects of closer relations between Nepal and Azerbaijan on bilateral and multilateral fronts were discussed, among other matters of mutual interest.

Similarly, Hon. Minister held a bilateral meeting with His Excellency Mevlüt Çavuşoğlu, Minister of Foreign Affairs of the Republic of Turkey during which views were exchanged on various areas of bilateral cooperation including air connectivity, tourism, trade, hydropower and newly established Technology Bank for least developed countries (LDCs).  Moreover, Turkey is a co-Chair of the Group of Friends of the LDCs and an observer of NAM.

In the afternoon, the Hon. Minister attended the luncheon hosted by the Foreign Minister of the Republic of Azerbaijan in honour of the heads of the delegations to the NAM Conference.

The Honourable Minister had arrived at Baku this morning in connection with the Conference and left Baku in the late evening today.

The Ministerial Conference was preceded by the Senior Officials Meeting (SOM) on 4-5 April 2018. H.E Durga Prasad Bhattarai, Ambassador/Permanent Representative of Nepal to the United Nations in New York, led the Nepali Delegation to the SOM. At the beginning of the SOM, Ambassador Bhattarai was elected as Chair of the Economic and Social Committee established by the SOM.

The Mid-Term Ministerial Conference will end tomorrow with the adoption of the “Baku Declaration” and “Baku Document” among others. The extensive preparatory negotiations on these documents held over the several months in New York. 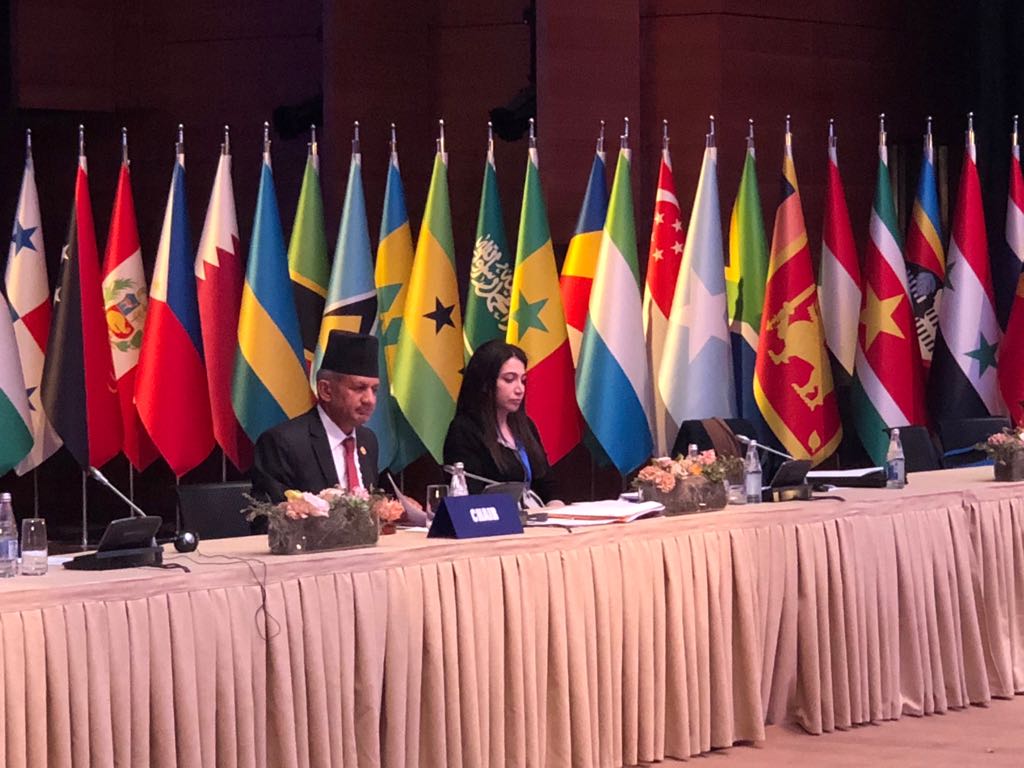