The Government of Nepal and the European Organization for Nuclear Research (CERN) signed an International Cooperation Agreement concerning scientific and technical cooperation in high-energy physics and related areas in Geneva today. The agreement was signed by H.E. Mr. Deepak Dhital, Ambassador of Nepal to Switzerland / Permanent Representative of Nepal to the UN and other International Organizations in Geneva on behalf of the Ministry of Science and Technology of the Government of Nepal and Dr. Fabiola Gianotti, Director-General of CERN on behalf of the CERN during a ceremony held at the CERN headquarters, Geneva.

The cooperation agreement has created a framework to ensure, on a long-term basis, opportunities for participation by scientists, engineers and technicians from Nepal in research projects of CERN. As per the provision of the agreement, Ministry of Science and Technology of Nepal will collaborate and cooperate in such research projects of CERN for which Scientific Institutes and Universities from Nepal have particular expertise. These include experimental and theoretical physics, accelerator and detector engineering, and computing. The agreement has thus opened opportunities for Nepali scientists, engineers and students to attend the CERN Schools, including the Accelerator School, the Computing School, the European School of Physics and the Summer Student Programme at CERN. During the signing ceremony, H.E. Ambassador Dhital and Director-General Dr. Gianotti expressed confidence that the signing of the cooperation agreement has created an important platform for further developing the scientific and technical cooperation between Nepal and CERN. Ambassador Dhital emphasized on Nepal’s willingness and interest to collaborate with CERN for realization of mutual benefits.

The European Organization for Nuclear Research (CERN) is an intergovernmental organization founded in 1954. Its main area of research is particle physics – the study of the fundamental constituents of matter and the forces acting between them. It is the largest research organization of its kind which has made remarkable achievements in the field of experimental and theoretical physics. The World Wide Web (WWW), for example, was invented at CERN in 1989. Other notable inventions include Hadron Therapy for cancer treatment and explication and interpretation of the Big Bang Theory on the creation of the Universe. From the South Asia region, India and Pakistan are Associate Members of CERN, whereas Sri Lanka, Bangladesh, and now Nepal, have international cooperation agreement with the CERN. 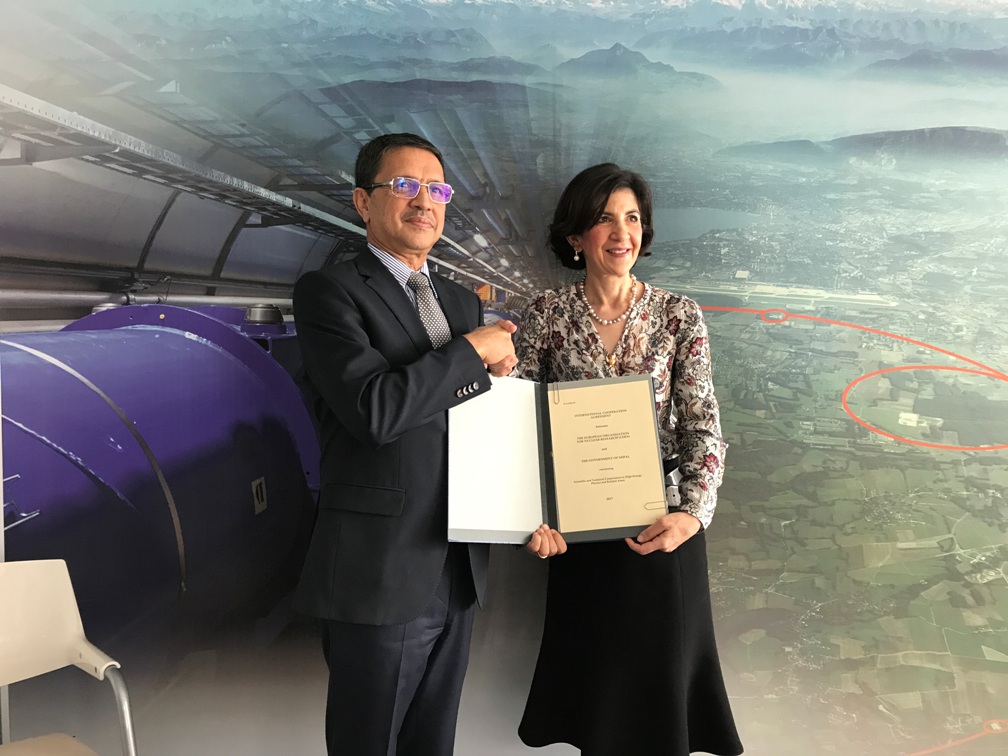