Rt. Hon’ble Prime Minister Mr. Pushpa Kamal Dahal ‘Prachanda’ inaugurated the Commemorative Program to mark the 60th anniversary of the establishment of diplomatic relations between Nepal-Japan by lighting the oil fed traditional Nepali lamp in Kathmandu today. The program was organized by the Ministry of Foreign Affairs.

Hon’ble Dr. Prakash Sharan Mahat, Minister for Foreign Affairs of Nepal highlighted the various aspects of Nepal-Japan relations and expressed happiness over the steady growth of these relations over the past six decades. He appreciated the substantial assistance provided by Japan in socio-economic development of Nepal which has been used in infrastructures and human resources development among others. He also underscored the importance of joint efforts to promote economic and commercial relations in the days ahead based on the foundation of excellent political relations subsisting between the two countries.

Speaking at the same function H.E. Mr. Nobuo Kishi, Minister of State for Foreign Affairs of Japan said that Japan and Nepal have enjoyed excellent relations. The support in the socio-economic development of Nepal would be continued from Japan assured the State Minister of Foreign Affairs.

During the Program Hon’ble Mr. Surendra Kumar Karki, Minister for Information and Communications of Nepal and H.E. Mr. Nubuo Kishi, Minister of State for Foreign Affairs of Japan jointly affixed the cancelation marks on the special commemorative cover published by the Postal Services Department of the Government of Nepal on the occasion.

A group of prominent Nepali artists from Cultural Corporation of Nepal and Japanese Drum Troops from Akafuji Daiko presented impressive shows featuring the typical culture of their respective counties during the program.

The Office of the Spokesperson 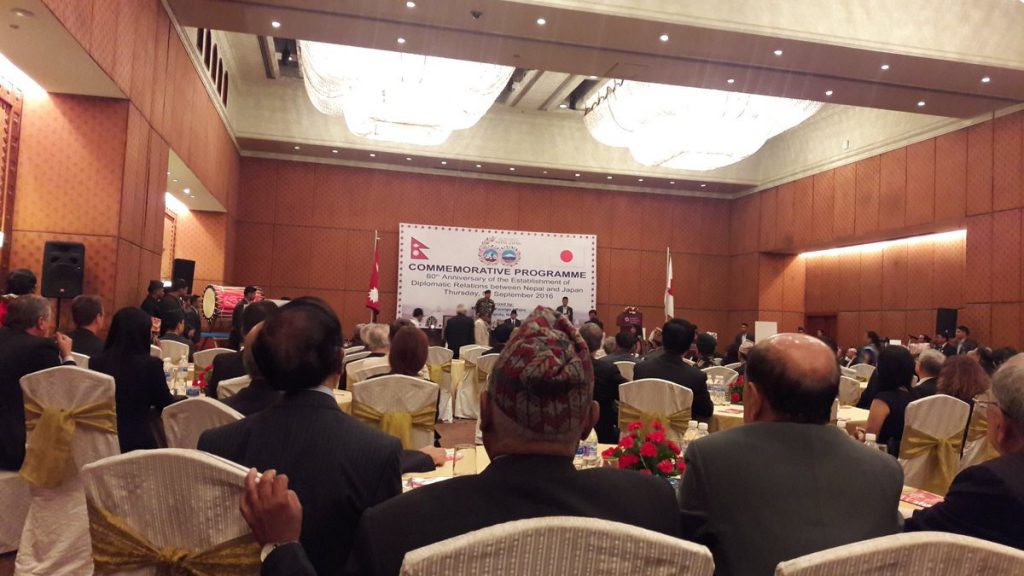