His Excellency Mr. Nobuo Kishi, Minister of State for Foreign Affairs of Japan arrived in Nepal on 30 August 2016 leading a delegation to attend the commemorative programme organized by the Ministry of Foreign Affairs, Government of Nepal to celebrate the sixtieth anniversary of the establishment of diplomatic relations between Nepal and Japan.

Earlier in the morning, State Minister Kishi also called on the Hon’ble Mr. Prakash SharanMahat, Minister for Foreign Affairs at his Office, Singhadurbar. During the meeting matters of bilateral cooperation and mutual interests were reviewed. The twosides also shared views on how these relations could be taken forward by seizing the opportunities available in both countries. Foreign Minister Dr. Mahat appreciated the unconditional support of the Government of Japan to the socio-economic development of Nepal. State Minister Kishi handed over the message of congratulation from His Excellency Mr. Fumio Kishida, Minister for Foreign Affairs of Japan addressed to Hon’ble Dr. Prakash SharanMahat on his appointment as the Minister for Foreign Affairs of Nepal. Extending his best wishes to Hon’ble Dr. Mahat, Foreign Minister Kishida has expressed his willingness to work together to further develop cordial relations between Nepal and Japan.

In the morning, State Minister Kishi attended the signing ceremony of the Exchange of Notes of the Grant Aid under Japan Overseas Development Assistance for two new projects- Improvement of Aviation Safety Facilities in Major Airports of Nepal and School Sector Development Program to the sum of approx. $ 15 million and $ 3 million respectively at the Ministry of Finance. The Notes were signed and exchanged by Mr. LokDarshanRegmi, Secretary at the Ministry of Finance and H.E. Mr. Masashi Ogawa, Ambassador of Japan to Nepal. The signing ceremony was witnessed by Hon’ble Mr. Krishna BahadurMahara, Deputy Prime Minister and Minister of Finance and H.E. Mr. Nobuo Kishi, Minister of State for Foreign Affairs of Japan.

The commemorative event is scheduled to be held tomorrow at Hyatt Regency Hotel, Kathmandu at the gracious presence of the Rt. Hon’ble Prime Minister. 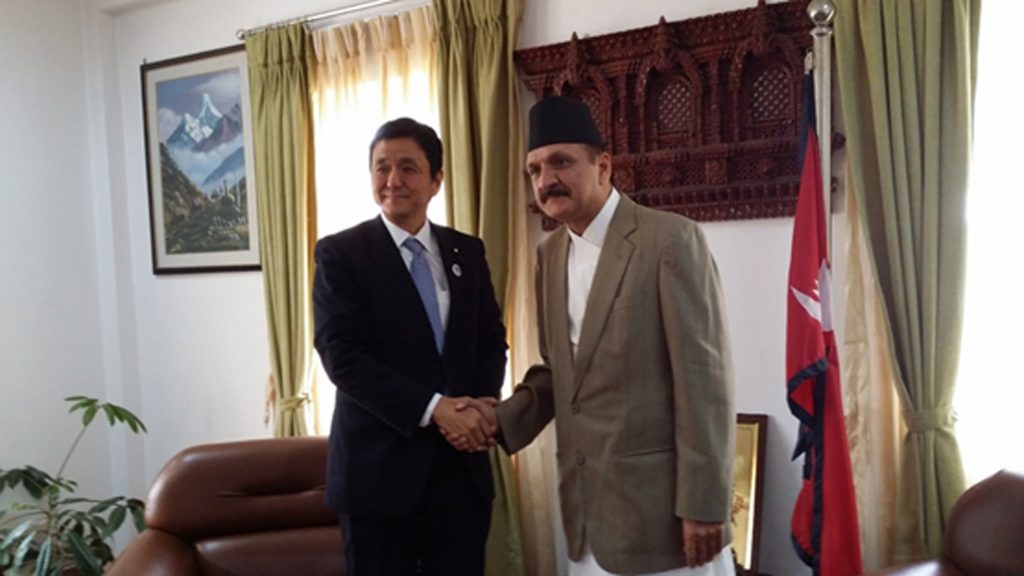