Let me first commend your leadership of ECOSOC in convening the High Level Political Forum this year as well as for the meticulous preparation for Voluntary National Review presentations.

As a land-locked, mountainous and least developed country emerging from conflict, and from the devastating earthquakes, Nepal understands that its journey towards achieving Sustainable Development Goals is full of challenges.

Yet, we in Nepal are committed not to be left behind in this journey. That brings us here to share our unique experience, including successes, challenges and lessons learned, with a view to accelerate the implementation of the 2030 Agenda in the country.

On behalf of the Government of Nepal, I have the honour to present Nepal’s VNRtoday.

Nepal’s Voluntary National Review comes through a rigorous consultation process.Over a period of six months, Government institutions,national stakeholders including the private sector, academia and civil society were involved in the preparation of the national report.

Inpast few decades, our development endeavor has yielded some good progressin socio-economic front. The achievements in the education and health sectors, in particular, have been impressive.

Similarly, the character of slow pace of growth has begun to see a positive change.

After a gap of several years, the country’s economy is expected to grow by7 percentin Fiscal Year 2016-17. Thiscould mark the beginning of a key turnaround for Nepal.

Building on the achievements so far, Nepal desires to swiftly complete the unfinished agenda of the MDGs, and step up its efforts towards realizing the SDGs. This objective perfectly fits into Nepal’s aspiration become a middle income country by 2030.

However, the road is full of multiple constraints- the constraints of resource, capacity, and technology. We are yet to attain the level of meeting required income criterion for the graduation.

The need is to forge real and meaningful partnership among all stakeholders to achieve the SDGs. A partnership that not only deliberates, but also delivers.

Our pursuit of development through the SDGs framework is testified by the fact that Nepal was among the first few countries to produce a preliminary SDGsReport in 2015, even before the formal adoption of the 2030 Agenda.

In collaboration with key development stakeholders, Nepal has set the country-specific SDG-related targets to be achieved by 2030. We have mainstreamed the 2030 Agenda into our national plans and policies. The 14th periodic plan, the national budget, and other sectoral plans have been closely aligned with the SDGs.

The 17 SDGs have been mapped into the five strategies of the 14th development plan. They are infrastructure development, economic prosperity, social development, governance and crosscutting issues. A total of 1,219 programs and projects are being implemented in the current fiscal year.

SDG codes have been assigned to all these annual programs in the national budget. Expenditure tracking methods have also been introduced.

We have put into implementation several programs aligning with those goals and targets; and have put concerted efforts to bring results out of them. Some of them have started yielding promising results.

The Constitutionof Nepal promulgated by the widely representative elected Constituent Assembly in 2015 is an embodiment of inclusive, participatory and rights-based development. It serves as the guiding light for development policies, plans and programs of the country.

The directive principles, policies and responsibilities of the state enshrined in the Constitution include all the three dimensions of SDGs – Social, Economic and Environmental.

Nepal’s achievements in gender equality have been inspiring. The Constitution guarantees at least one-third representation of women in the Federal Parliament as well as the Provincial Assemblies.

The recent elections to the local bodies has ensured close to a half of women’s participation. Either Speaker or Deputy Speaker of both the houses of parliament must be a woman. The President and Vice-President of the country should represent different sex or community. Currently we have 30% of women’s representation in the Parliament.

Nepal has halved extreme poverty in the past 15 years, and is on track to confine it to less than 5 percent by 2030. Weaspire to reduce undernourishment to 3 percent and underweight in children less than five years of age to 5 percent.

Our target is to reduce the maternal mortality rate to less than 70 per 100,000 live births. Other targets include virtual elimination of the prevalence of HIV, TB, Malaria, and other tropical and water borne diseases.

Similarly, the commitment and efforts of Nepal to create gender parity at all levels of education have been largely successful. Our goal is to eliminate the wage discrimination, sexual violence and all harmful social practices, such as child marriage.

Our target is to increase the share of employment by the industrial sector to 25 percent, with the manufacturing sub-sector itself providing 13 percent of the employment opportunities.

As envisioned by the SDGs, Nepal anticipates that all stakeholders will walk in tandem throughout the implementation phase by adhering in true spirit the notion of resource mobilization and capacity building as shared responsibility and accountability.

We have accorded high priority to the implementation of SDGs.

Three high-level committees have been formed to help implement them. At the apex is the Steering Committee chaired by the Prime Minister himself which demonstrates the highest political commitment.

A Coordination Committee chaired by the Vice Chairman of the National Planning Commission (NPC) and nine Thematic Committees headed by the Members of the Planning Commission are inclusive in terms of representation of the public and private sectors, as well as civil society and other national stakeholders.

Effective financing strategies becomecrucial for Nepal to achieve the 2030 goals. The Constitution of Nepal has envisioned complementary mobilization of resources from public, private and cooperative sectors for financing the socio-economic development efforts.

We have witnessed a sound progress in Nepal’s revenue mobilization in recent times.Despite this, it is vulnerable to likely swings in the large volumes of inward remittances, which bolster import-based taxation. The aim is to increase the share of revenue from about 22 percent of GDP today to 30 per cent by 2030. Domestic expenditures financed by revenue are estimated to reach 80 percent. In order to meet the private sector investment-financing gap, foreign direct investment  is expected to increase to 20 percent of GDP by 2030, from less than 3 percent in 2015.

The Government is preparing a document Envisioning Nepal 2030.The 2015 SDGs Preliminary Report is being upgraded to a Base Line Report, and at the same time, the investment requirements to achieve SDGs and implementation strategies are being finalized.

Let me now briefly highlight the challenges before us.

The SDGs are interlinked, indivisible, and ambitious and thus, pose major implementation challenges for low-income countries like Nepal.

As the country embarks on implementing a new federal structure of governance, a prominent challenge will be to quickly mainstream SDGs into the provincial and local level planning and budgeting systems. Inadequate database and lack of disaggregated data by sex, age, social groups, disability status, geography, income and sub-national level will hinder the monitoring of progress.

Apart from the challenges related to the realignment of policies, financing challenges will loom large. Triggering and sustaining job-creating economic growth, enhancing the quality of social service provisioning and ensuring adequate investment to reduce the risks from disasters will be a major hurdle for Nepal to successfully implement the SDGs.

The positive lessons learned from the MDG-era would be invaluable for Nepal as it embarks on an ambitious journey ahead. The coordinated resource mobilization mechanism has helped usproduce impressive results in health, education, water and sanitation sectors. While the triangular partnership between the government, private sector and development partners has proved effective in some other fronts. This needs to be augmented significantly if Nepal is to spur reforms that attract substantial private capital and entrepreneurship.

Before I conclude, I would like to take a balcony view of the global strides towards the 2030 agenda. Although the perceived success of MDGs did provide us the ground for elevating social, economic and environmental dimensions into a single broader goal –namely, the SDGs – achieving this is not easy.

We must realize that SDGs are combinations of extraordinary ambition that requires consistent political commitment and the ability to mobilize political and economic actors and the resources.

There is a need of installing a strong mechanism to oversee the progress at international and intergovernmental level, and further strengthen the current review and follow-up mechanism. In this regard, we believe a comprehensive matrix would be instrumental to review progress on all the Goals and targets with a view to facilitating feedback and corrective measures.

Mobilization of political will at national level, forging strong partnership at regional and international levels would be crucial for achieving SDGs.

It is an ambitious and arduous journey. However, it is a journey worth pursuing. Joined together, this journey will lead us to the goal that we all aspired for.

I thank you all. 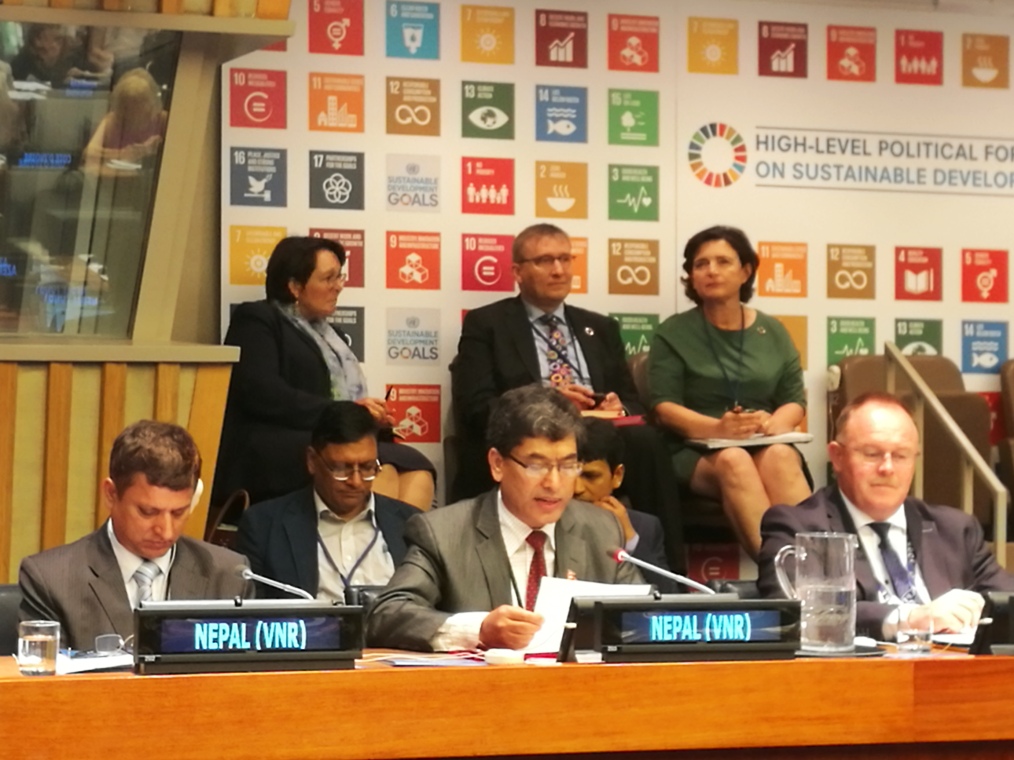