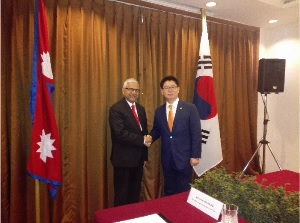 Nepal and the Republic of Korea (RoK) held 3rd bilateral consultation meeting between the Ministries of Foreign Affairs of the Government of Nepal and RoK today in Kathmandu.

During the meeting, both sides discussed the issues of mutual interests and reviewed all the matters of bilateral cooperation. The delegations shared views on the various aspects of Nepal-Korea relations so as to take them ahead in a forward looking manner.

The Nepali side appreciated the Government of the Republic of Korea for its continued support and cooperation in the overall socio-economic development of Nepal. The Korean side expressed its readiness to continue cooperation in the socio-economic development efforts and priorities of the Government of Nepal. Both sides agreed to enhance cooperation and maintain regular contacts at different levels and also agreed to work together to further strengthen the Employment Permit System for mutual benefits, promote tourism, trade and connectivity between the two countries and cooperate at regional and global levels on matters of mutual interests, among others.

Mr. Aryal, leader of the Nepali delegation hosted a luncheon in honor of the visiting delegation.