During the ceremony, Ambassador Rai conveyed cordial greetings and best wishes from the Right Honourable President Mrs. Bidhya Devi Bhandari and Right Honourable Prime Minister Khadga Prasad Oli as well as the people of Nepal for the personal health and happiness of the President and the continued progress and prosperity of the people of Kenya. His Excellency William Ruto, Vice-President, of Kenya and other high dignitaries were present on the occasion.

H.E. President Kenyatta expressed his congratulations to the President and the Government of Nepal for the promulgation of the Constitution and also expressed his best wishes for peace and prosperity through its effective implementation. Ambassador Rai expressed his gratitude for the goodwill and solidarity of the Government and people of Kenya towards Nepal and her people. He apprised the President Kenyatta about the political development in Nepal including the promulgation of new constitution on 20 September 2015 through the Constituent Assembly. He also highlighted the post-earthquake reconstruction efforts of the Government of Nepal as a priority matter of the government.

Ambassador Rai also met with Her Excellency Monica Juma, Principal Secretary, Ministry of Foreign Affairs & International Trade, and views were exchanged on a range of issues pertaining to strengthening of bilateral relations and cooperation not least in trade, investment and tourism. He also inspected the Office of the Honorary Consulate of Nepal in Nairobi and instructed Honorary Consul Mr. Jimmy Askar to redouble the efforts for promotion of  Nepal’s commercial and economic interest and as well as protection of consular interest of Nepalese people living in Kenya.

In the evening of 8th June, Ambassador Rai addressed the interaction program organized by NRN Kenya focusing on strengthening of cooperation between the Embassy and NRN for resolving the growing problems of Nepalese people in Kenya and other East African countries. 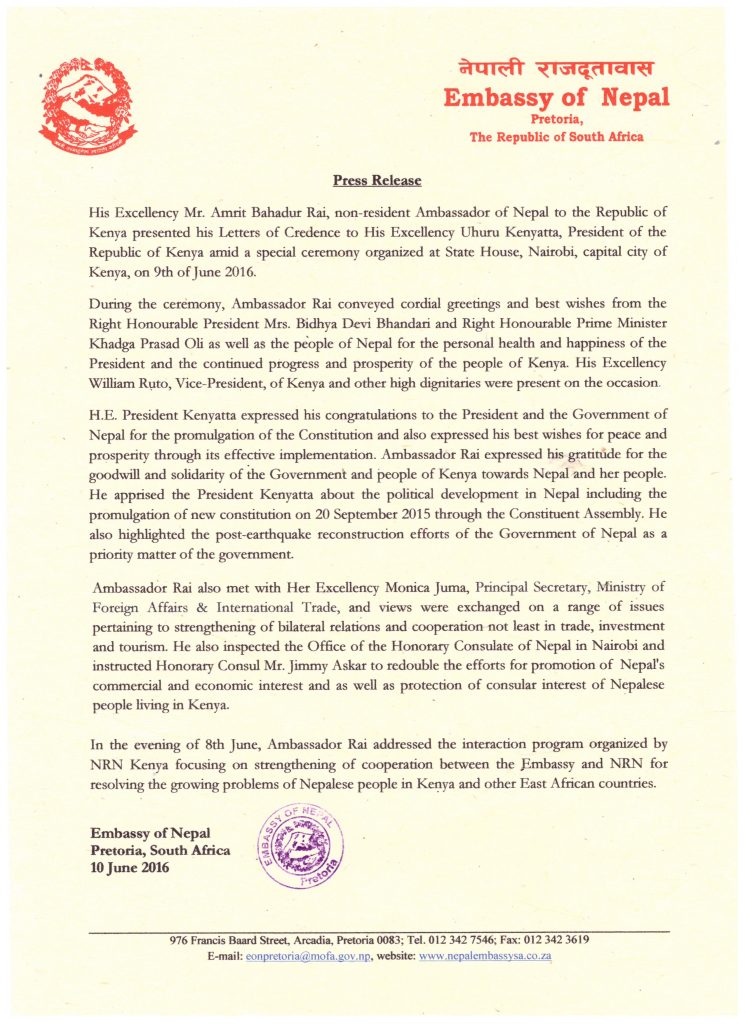