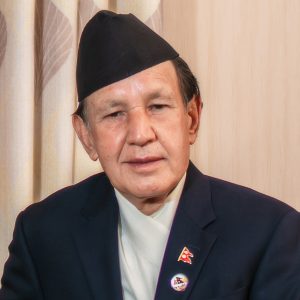 Hon. Minister for Foreign Affairs, Dr.Narayan Khadka was a political activist during his student days. He fought the autocratic royal regime for the restoration of freedom and democracy in Nepal and was imprisoned a number of times for his activism. He served for a year as the Chief Advisor to the Prime Minister (1999-2000), late Mr. Krishna Prasad Bhattarai, one of the most senior and respected leaders of Nepal. He was later appointed as the Vice Chairman of the National Planning Commission in 2002. He was elected for three consecutive terms in the Parliament, two terms as Constituent Assembly Member from 2008-2012 and from 2013-2017 and third term as Member of the Federal Parliament from 2017 till date.

Hon. Minister Khadka received a PhD (Economics) from the University of Pune, India in 1981 and he pursued post-doctoral studies at the University of Heidelberg, Germany (1983-1985). Subsequently, he was a visiting fellow at various research institutes and universities in Europe and North America. Hon. Minister Khadka has authored three books which are well regarded in the field; these include: Foreign Aid, Poverty, and Stagnation in Nepal (1991); Politics and Development in Nepal (1994); and Foreign Aid and Foreign Policy: Major Powers and Nepal (1997). He has published over two dozen academic articles on a wide range of topics on political economy and international development in recognized international journals published from the US, Canada, UK, Australia etc.

Hon. Minister Khadka has had a sustained interest in social work throughout his long career and has been involved in numerous initiatives for participatory development in the areas of physical infrastructure, health, women’s empowerment, and economic uplifting of the community. He is the founding Chairman of the Kathmandu Valley Public Library, one of the leading libraries in the country.

Over the years, the Hon. Minister has led the Government of Nepal at numerous international forums serving in various capacities.