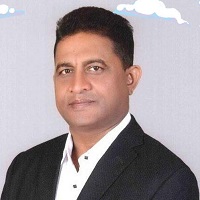 Hon. Raghubir Mahaseth assumed office as Deputy Prime Minister and Minister for Foreign Affairs of the Government of Nepal on 04 June 2021.

Previously, Hon. Mahaseth served as Minister for Irrigation in 2011 and as Minister for Physical Infrastructure and Transport in 2018. Prior to that, he had also served as Executive Chairman of Udayapur Cement Industries Ltd., a State Owned Enterprise.

He holds academic qualification of Bachelor of Engineering (Civil) from the Birla Institute of Technology, India in 1987.

He was born on 30 November 1961 in Janakpur Sub-Municipality-9, Dhanusha District, Nepal. He is married to Mrs. Juli Kumai Mahato, who is a Member of Central Committee of Communist Party of Nepal (United Marxist Leninist) and former Minister for Women, Children and Senior Citizens. They have two children; a son and a daughter.