The Rt. Hon. Sher Bahadur Deuba, Prime Minister of Nepal, arrived in New York this morning, to lead the Nepali Delegation to the 72nd Session of the United Nations General Assembly (UNGA). The Prime Minister is scheduled to address the UNGA on 23 September 2017. He is also scheduled to hold bilateral meetings with several counterparts on the sidelines.

Earlier in the morning today, the Hon. Krishna Bahadur Mahara, Deputy Prime Minister and Minister for Foreign Affairs (DPMFM), signed on the Treaty on the Prohibition of Nuclear Weapons at a signature ceremony held at the UN Headquarters in New York. After ratification, Nepal will be a party to the Treaty.

Also in the morning, the DPMFM attended the Non-Aligned Movement (NAM) Ministerial Meeting which was organized on the theme of “Unilateral Coercive Measures, in violation of International Law and the Human Rights”. Highlighting Nepal’s principled position of non-alignment, he called for the application of peaceful means for resolving all differences.

Likewise, Hon. Mahara also attended the 16th Annual Ministerial Meeting of the Landlocked Developing Countries (LLDCs) which was organized on the theme of “Accelerating the implementation of the Vienna Programme of Action and the 2030 Agenda for Sustainable Development”. In his statement at the meeting, Hon. Mahara said that international support measures, not just Official Development Assistance (ODA) but also partnerships, technology transfers and investments, need to be increased to ensure meaningful participation of LLDCs in global value chains and international trade.

Similarly, Hon. DPMFM participated at the High-level Open Debate on Reform of UN Peacekeeping organized by the UN Security Council today. Addressing the Security Council, he reiterated the commitment of Nepal, currently the sixth largest troops and police contributing country, to support reforms in peace operations, while calling for implementation of the high-level reports without violating their integrity and ensuring the safety and security of the peacekeepers to enable them to effectively carry out the mandate of protection of civilians.

At the High-level event on ‘SDG Implementation, Financing and Monitoring; Sharing Innovations through South-South and Triangular Cooperation’ organized earlier this morning by Bangladesh, the DPMFM remarked that enhanced south-south cooperation, especially sharing of innovation, can play a crucial role to implement the transformative 2030 Agenda. During the event, he launched a publication, “South-South in Action” together with the Prime Minister of Bangladesh, the President of Estonia, the Prime Minister of Curacao, the Netherlands, and the Director of UN Office for South-South Cooperation.

Also today, Nepal and Niger established diplomatic relations. Hon. DPMFM and H.E. Mr. Ibrahim Yacoubou, Minister of Foreign Affairs, Cooperation and African Integration of Niger signed the Memorandum to this effect at the Permanent Mission of Nepal this afternoon. With this the number of countries with which Nepal has established diplomatic relations has now reached 151.

In the margins of the UNGA, Hon. Mahara had separate bilateral meetings with H.E. Yusuf bin Alawi bin Abdullah, Foreign Minister of Oman and H.E. Mark Field MP, Minister for Asia and the Pacific of the United Kingdom. Likewise, Acting Asst. Secretary of State of the US Ms. Alice Wells called on Hon. Mahara this afternoon. Various aspects of bilateral relations and cooperation figured during these meetings. 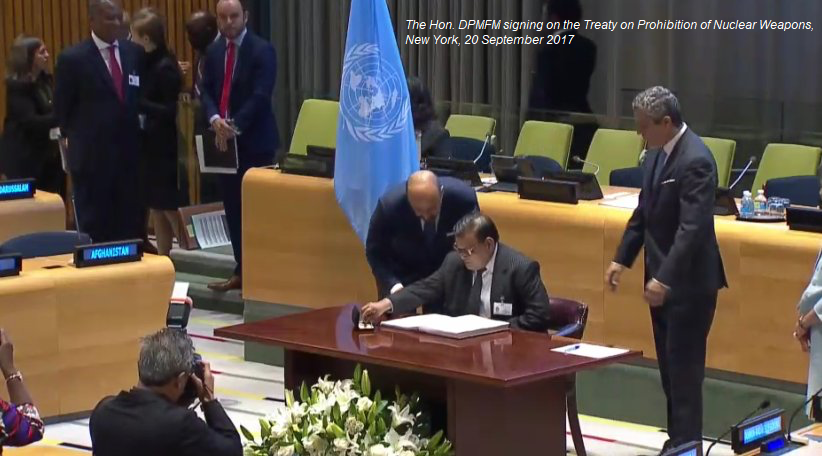 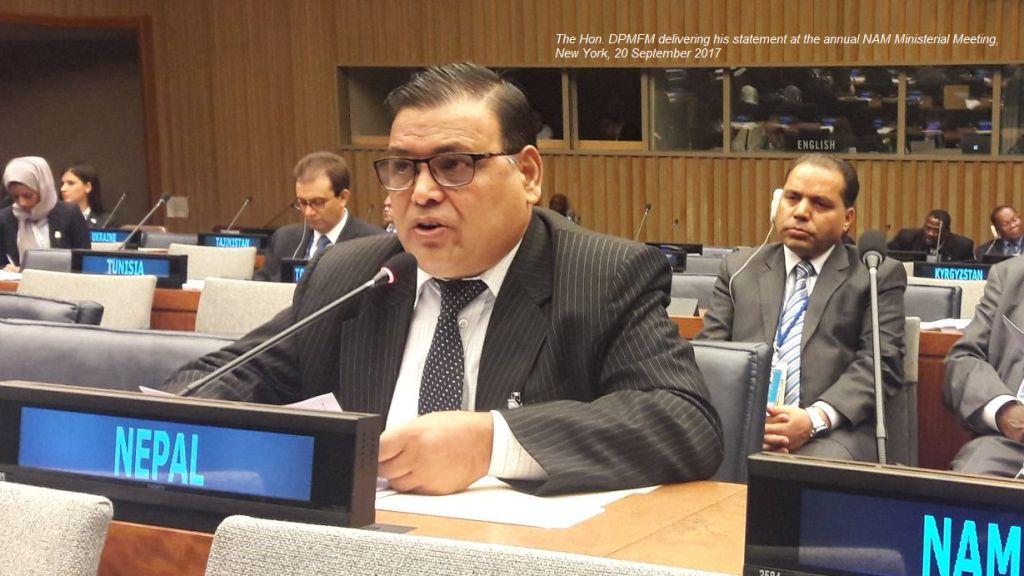 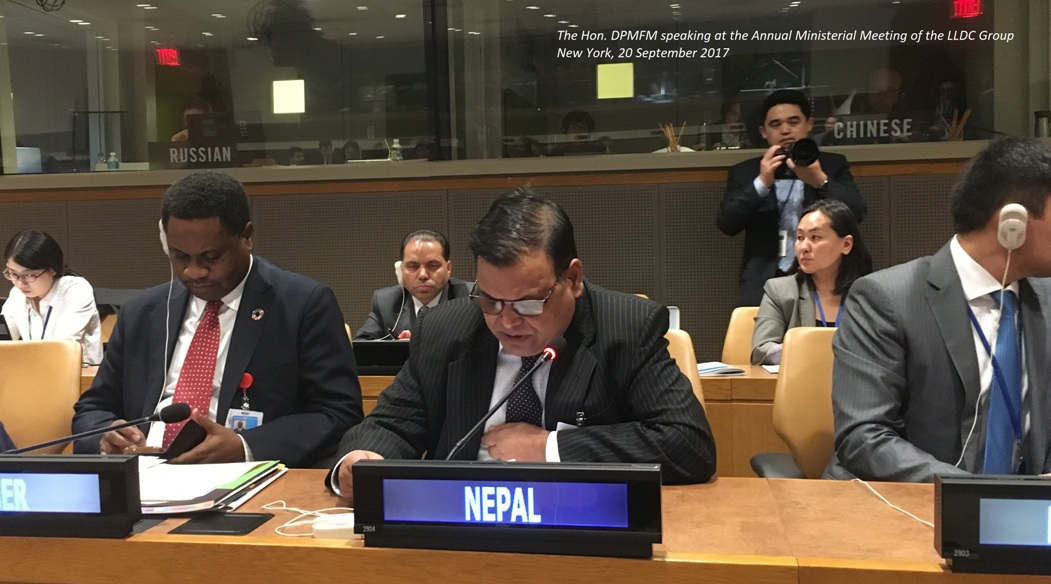 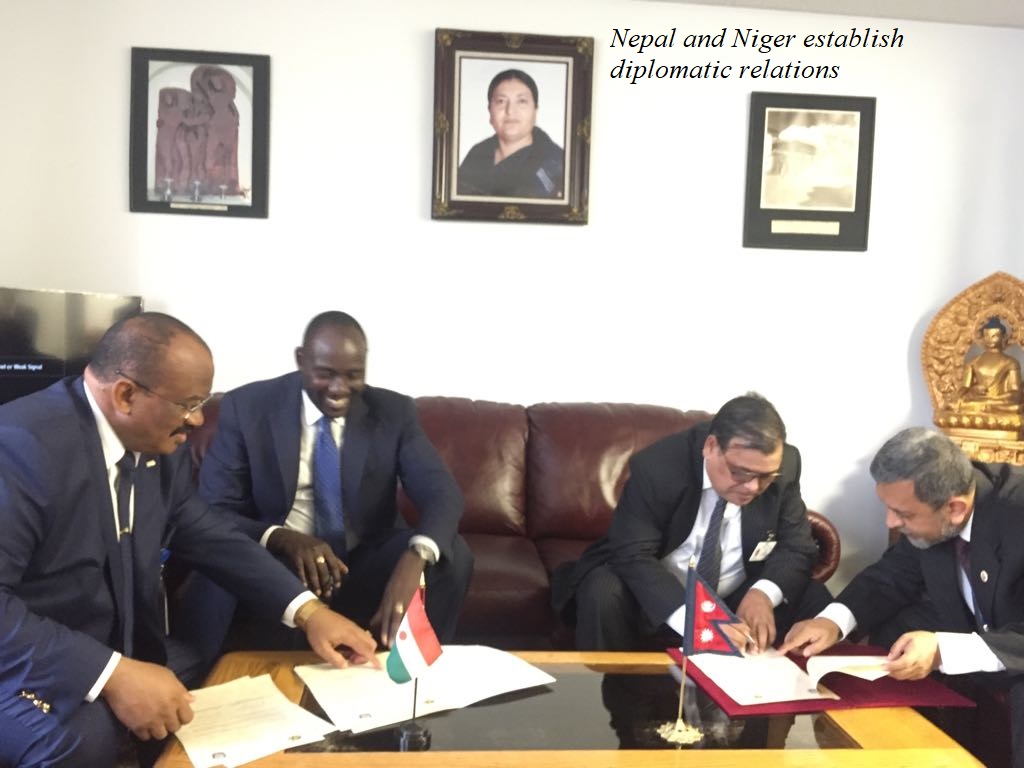 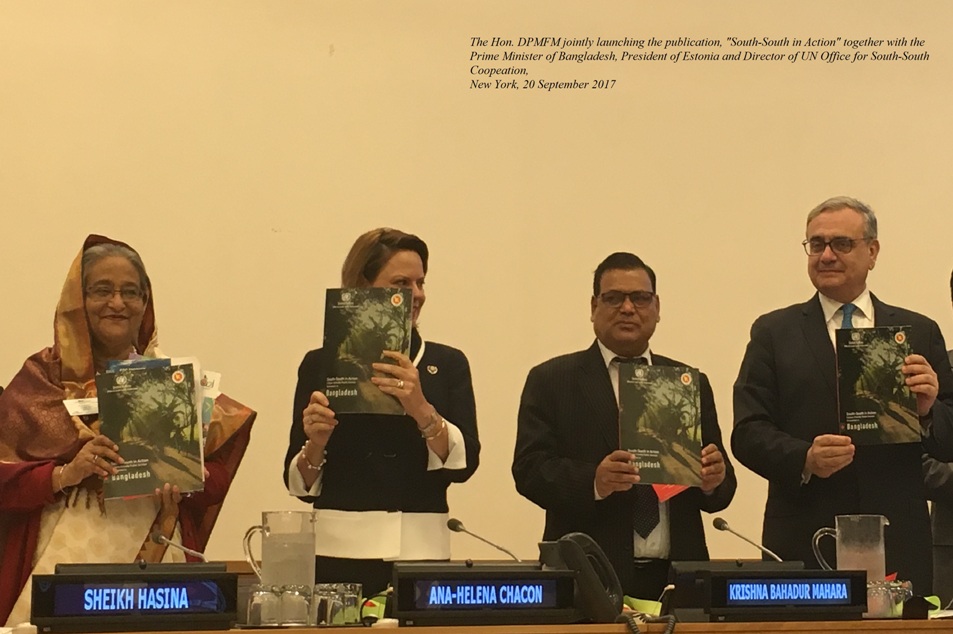